How does dolphin therapy work ? ..and what does it involve?

How does dolphin therapy work ? ..and what does…

How does dolphin therapy work?

Dolphins have been a source of fascination for the human race for thousands of years. In recent years there has been considerable research into dolphin therapy and some of those who have received it have given supportive testimony.

Non-medical therapies deal with the restoration of psychological or physical functions of humans and with questions of therapeutic action. The aim is to improve the state of health of people with mental or physical problems and to enable them to shape their own everyday lives independently and capable of action. The therapies include animal assisted therapy, occupational therapy, art therapy, speech therapy, music therapy, physiotherapy and sports therapy.

Treatment in a pleasant environment. Encounters with dolphins invoke a deep emotional response. It is believed that children are more responsive to this kind of treatment because they play in a pleasant environment, which motivates them to complete tasks. It has also been suggested that dolphins can sense areas of disability in the human body and they motivate children to use these parts.

Sound the healing principle is similar to that of sound therapy. Rhythm and vibration sound facilitate an altered mood. Swimming with dolphins can create physiological cell and tissue change in the body. Dolphins have a natural sonar, they admit ultrasound waves to localize things and to communicate. This process is called “echolocation”. Dolphins signal frequencies can have a profound effect on the human brain by modifying the brainwave activity.

It was also noted that both sides of the brain enter into synchronization, which means there is a far better communication between the left and right sides of the brain. This is an uncommon neurological state, which is typically associated with heightened awareness and increased learning ability. 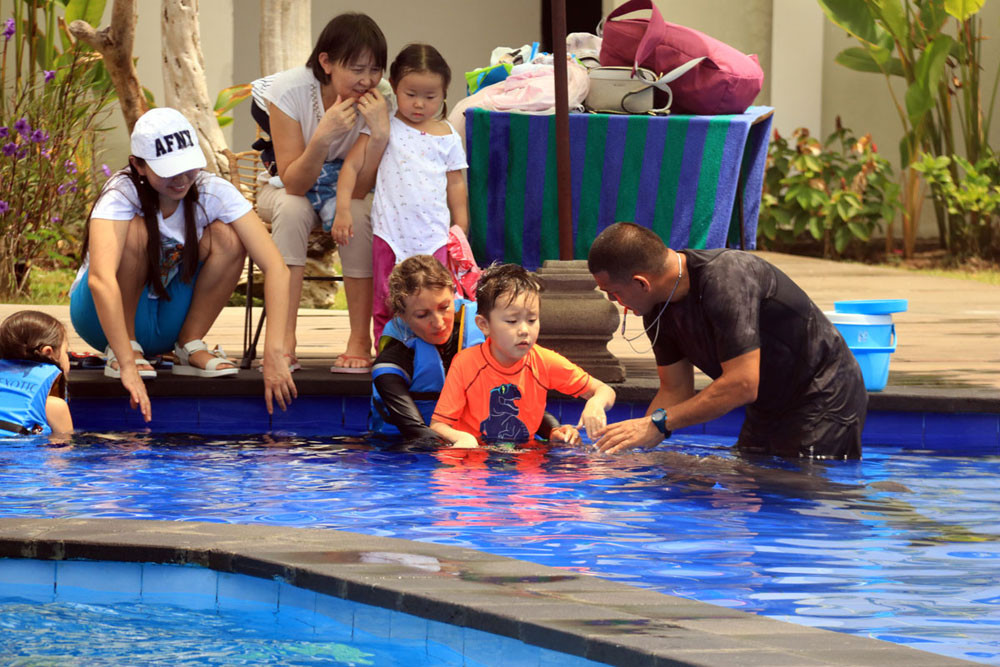 Image 1 of 12
How does dolphin therapy work  – The theory behind dolphin assisted treatment is based on two philosophies. One of these is that the unconditional love and support a dolphin has to offer can benefit children and mentally ill patients in many ways. A dolphin seems to have human-like emotions, so a deep trusting bond can develop between patient and mammal. Some proponents of dolphin assisted therapy claim that the compassion a dolphin displays increases the patient’s self-confidence, because the patient is never judged. Increased self-confidence can lead to better social skills and academic improvement.

How does dolphin therapy work – The second part of the theory involves a more scientific approach. It involves echolocation (echolocation: a high-pitched sound sent out by the dolphin that bounces off an object and returns. The dolphin interprets the returning echo to determine the object’s shape, direction, distance, and texture). Some say that the dolphins’ use of sonar and echolocation produce changes in the body tissue and cell structure of patients who associate with them. Others believe that sound waves emitted by the dolphins in communication and echolocation stimulate healing. A diminishing of anxiety and depression, enhanced learning in handicapped children, and pain relief are all attributed, by some researchers, to dolphin echolocation.

Those persons who experienced the therapeutic exposure to dolphins consistently displayed brainwaves that transitioned from “beta waves” to “alpha waves” and even to “theta waves”. By way of explanation, “Beta waves” are often an indicator of “active, energized” brain activity, while “Alpha- Theta waves” are often displayed in a relaxed, meditative “state of mind” that can facilitate the possibility for improvement.

What does dolphin therapy involve?

Dolphin therapy is more than just swimming with or being in contact with dolphins. Programs, customized to the individual, are devised by therapists. Therapy takes place next to and in a pool with captive dolphins. The therapists assist the individual to engage in activities targeted at improving specific skills, movement or behaviors. These activities may directly involve the dolphins or contact with them may be used as a reward or motivation for performing the activity.

Dolphin therapy does not claim to cure any specific condition but it may help alleviate some symptoms associated with some conditions.

Researchers analyzed blood samples taken before and after underwent therapy, result showed that after swimming with dolphins there is evidence of a change in levels of hormones, endorphins and enzymes. How this is possible is still not well understood. There is ongoing research in universities and dolphin research centers.

The regular course of a therapy session could be described as follows:

– What does DAT mean for this specific person

– Every day evaluation of the therapy sessions

How does dolphin therapy work ?